January 6, 2016, LAS VEGAS- EHang, unveiled today at CES the EHang 184, the world’s first electric, personal Autonomous Aerial Vehicle (AAV) that will achieve humanity's long-standing dream of easy, everyday flight for short-to-medium distances. Developed independently by EHang, the fully ready-to-fly AAV is a manned drone capable of automatically carrying a passenger through the air, simply by entering a destination into its accompanying smartphone app. Due to the 184’s fully automated navigation, made possible by EHang’s 24/7, real-time flight command center, passengers have no need for a pilot's license – they simply sit back and let the drone take over from there. This first realization of automated flight signifies a major turning point not only for the transportation industry, but also for a huge swath of other fields such as shipping, medical care and retail. 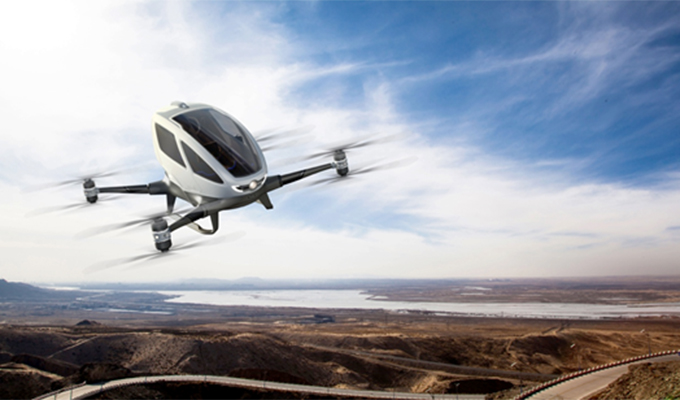 “It’s been a lifetime goal of mine to make flight faster, easier and more convenient than ever. The 184 provides a viable solution to the many challenges the transportation industry faces in a safe and energy efficient way,” said EHang CEO Huazhi Hu. “I truly believe that EHang will make a global impact across dozens of industries beyond personal travel. The 184 is evocative of a future we’ve always dreamed of and is primed to alter the very fundamentals of the way we get around.” 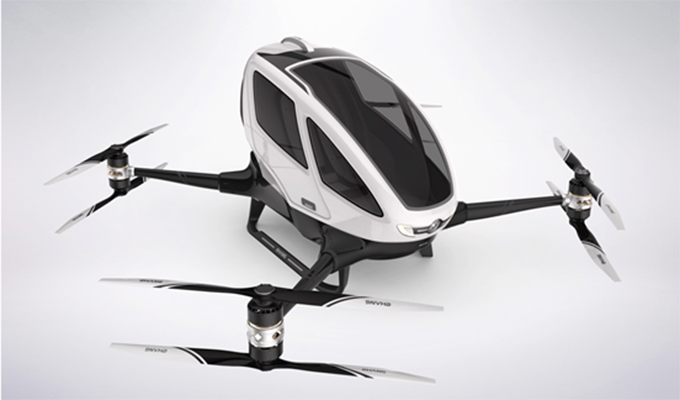 The EHang 184, which was named for ‘one’ passenger, ‘eight’ propellers, and ‘four’ arms, is the next wave of innovation from EHang. Having already released a successful consumer product with their Ghost Drone line, EHang is now creating another disruptive and innovative technology to propel us towards the future of solo human transport. Significant features include:

·         The EHang 184 has built in reinforcements for all flight systems, so that in the unlikely event that a component does fail, multiple backups are already in place to seamlessly take over.

·         EHang’s independently developed Fail-Safe System ensures that if any components malfunction, or if there’s damage while the AAV is in-flight (i.e. from a bird), the aircraft will immediately begin taking the necessary precautions to ensure safety. The 184’s Fail-Safe System automatically evaluates the damage and determines whether the AAV will need to land to ensure its passenger’s safety.

·         The EHang 184 AAV flight control systems have multiple sets of sensors that provide the drone a constant stream of real-time data.

·         The 184’s communication system was also designed with a safety guarantee: every system is encrypted, and each AAV comes with an independent key.

·         In the event of an emergency, passengers can elect to halt flight and simply hover in the air with just one click.

Automation: The 184 uses multiple independent flight control systems to automatically navigate passengers from point A to point B. These systems combine real-time data collected from sensors throughout the flight and automatically plot the fastest and safest route to carry passengers to their destinations. 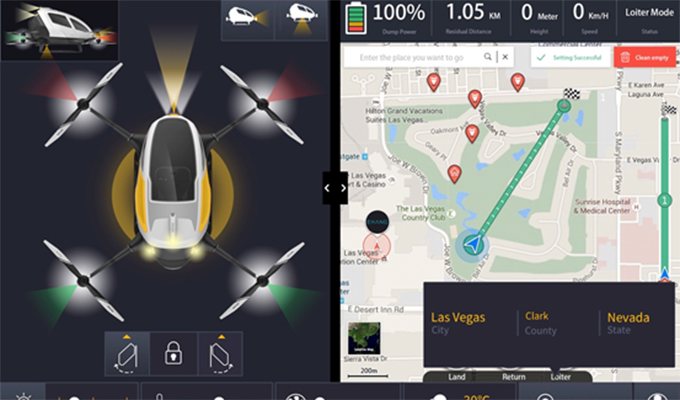 Remedy for Aging Transportation Industry: The EHang 184 AAV takes off and lands vertically, subsequently eliminating the need for runways. Its foldable design solves the logistical and spatial issues that have constrained airplanes and other modes of air-travel from expanding into daily use. Mass-adoption of the 184 has the potential to streamline congested traffic and dramatically reduce the kinds of accidents associated with any human-operated vehicle.

The Power of Electricity: The 184 is 100 percent electric and doesn’t depend on fossil fuels, reducing our reliance on substances that can be environmentally damaging.

Sync-flight Management Platform: EHang is also building an advanced low-altitude flight command center which will be in constant contact with all of its flying vehicles. While the 184 is able to fly during thunderstorms and other extreme weather conditions, the command center can prohibit the AAV from taking off as a precaution. 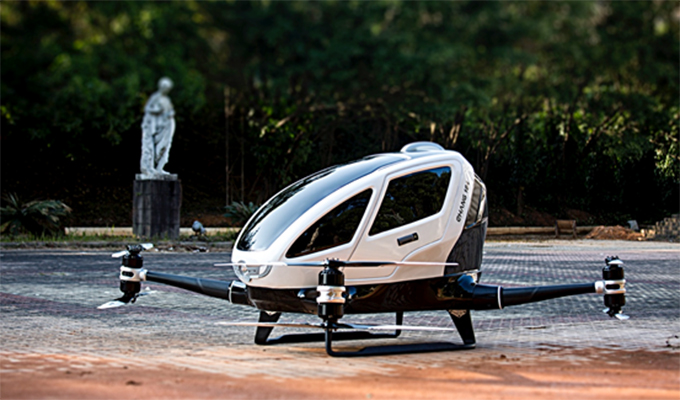 ·         Standing about 1.5 meters tall and weighing 240 kilograms, the EHang 184 AAV has a load capacity of 100 kilograms, with the maximum output of 152KW powered by eight motors. It’s designed to have the capability to carry a single passenger for 25 minutes’ duration flight at sea level at average cruising speed of 60 km/h. 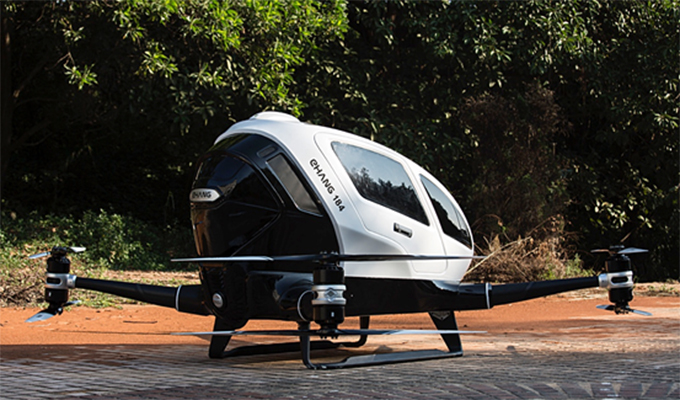 ·         The EHang 184 AAV body consists of a cabin for single passenger with a gull-wing door, a trunk and the power system composed of four arms and eight propellers on the bottom. The four arms, when folded, allow the AAV to occupy the same size parking space as consumer cars. 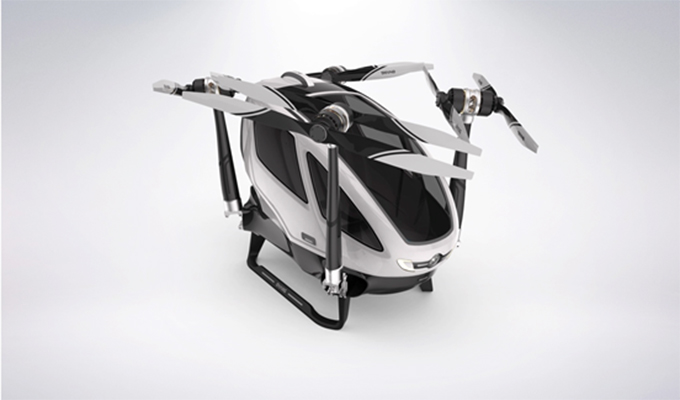 ·         Inside the cabin is placed a single seat, with a design similar to an F1 racing car seat. In front of the seat is a tablet console, through which passengers can easily input commands. Additionally, the cabin’s built-in air conditioner automatically adjusts the in-cabin temperature. Complete with 4G communication network, EHang 184 provides passengers with comfortable and enjoyable riding experiences. 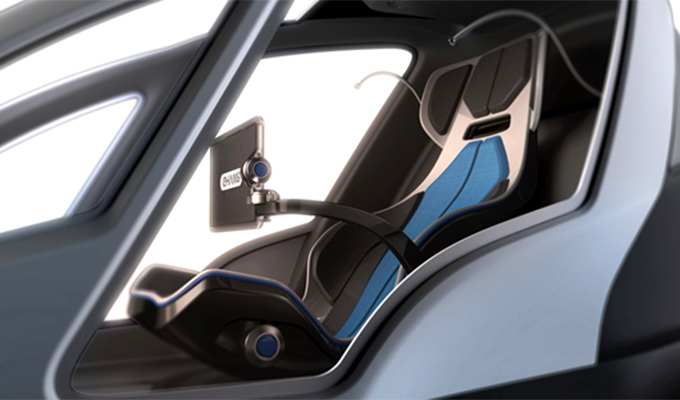 This first glimpse of the EHang 184 offers just a small sense of its massive potential, even beyond transporting passengers. It promises limitless possibilities and will undoubtedly impact the way we all travel in profound ways.