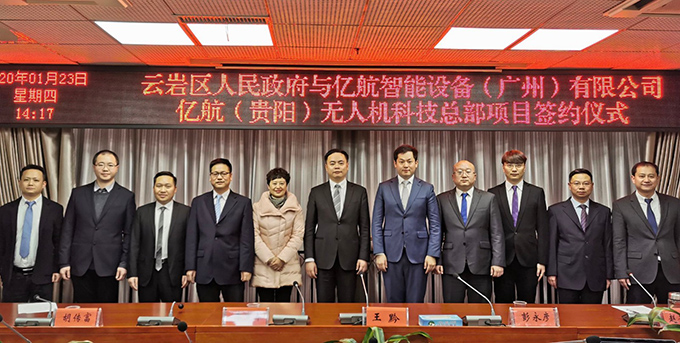 Wang Qian, Deputy Secretary of the Party Committee and head of the People’s Government of Yunyan District with Xiong Yifang, EHang’s Co-founder and CMO at the signing ceremony.

As the capital of Guizhou Province, Guiyang is an important node city of “the Belt and Road Initiative” and a core city of the inland open economic experimental zone. It is a vital transportation hub for connecting Southwest China and the New Western Land-Sea Corridor. It is also an internationally renowned big data city, ranking among the top eight national data comprehensive pilot areas, attracting Apple, Qualcomm, DELL and other international technology companies. As the largest economic entity in Guiyang, Yunyan District has developed itself into “the bellwether” in scientific and technological innovation in recent years.

Wang Qian, Deputy Secretary of the Party Committee and head of Yunyan District  said, “in accordance with the conclusions of the 5th and 7th plenary sessions of the 10th CPC Committee of Guiyang, the whole city has put forth concerted efforts to promote the development path of ‘adhering to high standards and requirements, speeding up high-level opening up, and promoting high-quality economic development’, striving to build an international big data city, and focusing on promoting intelligent manufacturing and high-tech industries in Yunyan District. Guiyang heartily welcomes EHang, a leader of the global emerging industry of UAM to Yunyan District, which will bring its globally cutting-edge technology to energize the construction of an intelligent city.”

In November 2019, Guangdong and Guizhou provinces become cooperation provinces responding to the national “East-West Cooperation”. As an excellent representative enterprise of Guangdong Province, EHang will bring its AAV technology to settle down and develop in Yunyan District of Guiyang. Meanwhile, incorporating its four air ecosystems of UAM (including passenger transportation and logistics), smart city management and aerial media, EHang will also explore the application and deployment of 5G internet-connected UAV cloud data technology in Guiyang, so as to jointly promote the commercial launch of the AAV technology together with Yunyan District.

Xiong Yifang, EHang’s Co-founder and CMO, said, “after five years of development, UAM has gradually grown into a new blue ocean in the global market. In the future, EHang will take Yunyan District as a starting point to carry out commercial use cases in tourism, medical first aid, logistics and transportation, urban intelligent management, among others. Meanwhile, EHang welcomes more city partners to join in and work together to promote the industry, so that the world can have earlier enjoyment of this safe, automatic and green new travel mode.” 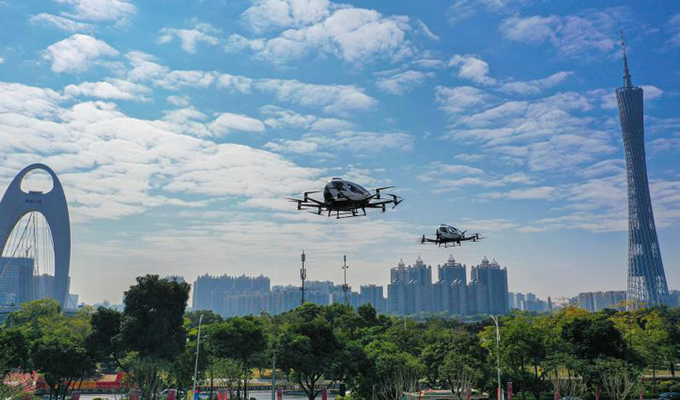 As a global pioneer and leader in the field of UAM, EHang first released the passenger-grade AAV at CES 2016 in the United States, and then completed a great deal of flight tests in the United Arab Emirates, the Netherlands, Qatar, Austria, as well as Guangzhou, Changchun, Taizhou and other places in China. In January 2020, EHang obtained a FAA flight approval and completed its first trial flight in Raleigh, the capital of North Carolina. EHang became a publicly listed company on December 12, 2019 when it listed on the Nasdaq Global Market under the ticker symbol “EH”, becoming the first listed company of global UAM.

UAM, as the most cutting-edge new industry in the world, provides safe, automatic and eco-friendly solutions for increasingly severe urban congestion and pollution problems with aerial 3D traffic, which has widely garnered international attention. According to a research report released by Morgan Stanley, by 2040, UAM’s market value will reach $1.5 trillion. 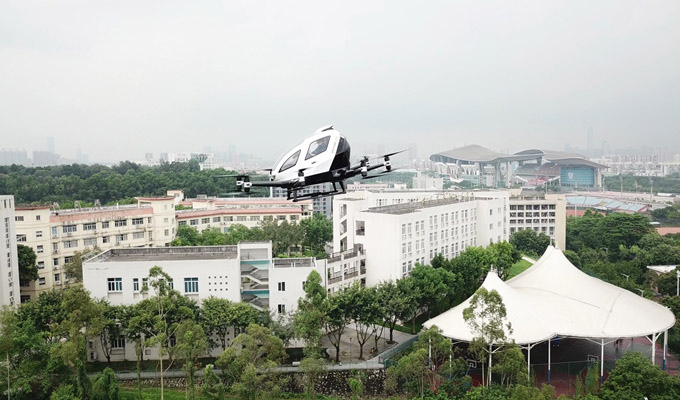